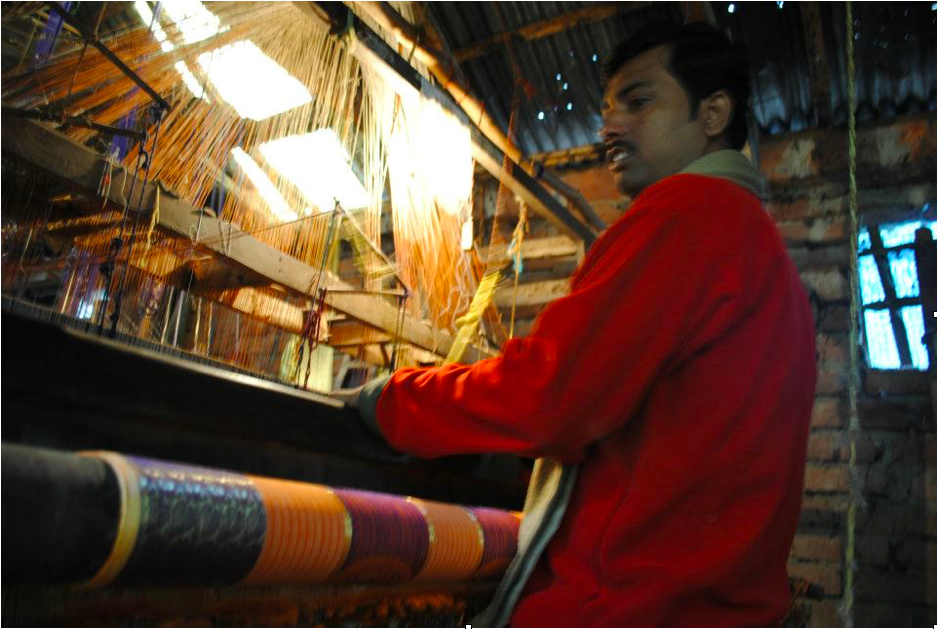 Since ancient times, Shantipur and the surrounding region has been famous for handloom saris (sah-ree). The handloom weaving style unique to this region are famously known as Santipuri Sari (taat). After the partition of India, Bengal was split into two major regions. West Bengal became a part of India and East Bengal became East Pakistan (Bangladesh). Many skilled weavers from Dhaka, in current day Bangladesh, migrated into West Bengal. Through government support for Indian handicrafts and arts, the weaving community slowly grew and thrived. Saree’s and finely woven feather-touch textiles are still being produced in the same traditional method today. One can find the patterns and colors found in ancient times still reflected in the garments produced in the vast textile belt of Shantipur.
The typical Tant saree is characterised by a thick border and a decorative pallav, woven using a variety of floral, paisley and other artistic motifs. Some of the popular traditional motifs are: bhomra (bumble bee), tabij (amulet), rajmahal (royal palace), ardha-chandra (half moon), chandmala (garland of moons), ansh (fish scale), hathi (elephant), nilambari (blue sky), ratan chokh (gem-eyed), benki (spiral), tara (star), kalka (paisley) and phool (flower). Printed, hand-painted and embroidered patterns are also used to get a larger variety of designs. Different motifs including floral element, solar element and recently even modern art are depicted in this saree. Tant Saree comes with colourful design  and borders are made thicker because it is subjected to tear easily.

The term “tant” refers to the handlooms in Bengal that are used to weave cotton sarees along with dhotis and other garments. The earliest record of handloom saree weaving in Bengal can be traced back to the 15th century in Shantipur (in the Nadia district of West Bengal). The art continued to flourish during the Mughal rule (16th – 18th centuries), when it received extensive royal patronage along with muslin and jamdani weaving. While the fine muslins adorned the royal class, cotton sarees or tants were used for draping by the common folks. This weaving tradition continued during the British rule and the decades prior to independence witnessed an inflow of modern weaving techniques in Shantipur such as improvements in the handloom and introduction of the jacquard loom that is still used today.

After the partition of Bengal in 1947, many Hindu weavers from Bangladesh migrated to India and were rehabilitated in West Bengal. Fulia (or Phulia), a town neighbouring Shantipur, became a new home for these weavers from Tangail (of Bangladesh), who brought with them the weaving traditions of their ancestral land. Other migrating weavers were settled in the Hooghly and Burdwan districts of West Bengal. Over the years, each of these regions developed their own style of weaving and today, they are the homes of the most well-known varieties of tant sarees.

‘Jamdani’ – the great characteristic of fine art in hand weaving derived from a “PERSION” word ‘JAM’ meaning a ‘cup’ and ‘DANI’ denotes the ‘container’ . Jamdani style of weaving flourished under the benign, rich and enlightened patronage of kings and emperors. It may be considered as a textile of excellence for its super fine qualities in the fifteenth & sixteenth centuries. Excellence in weaving lies in the virtuosity of forms drawn from the social, religious and natural environment and translated through a particular technique and the weaver’s sensitivity to create a new art form.